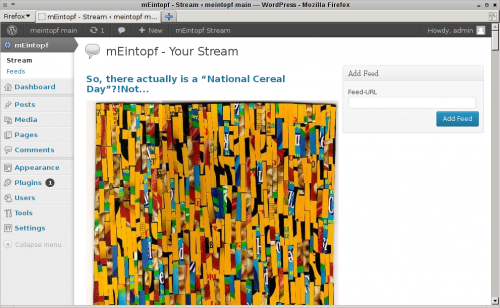 A few weeks ago, I jotted down some ideas on an open source soup.io clone, or at least something close to that. Since then, quite a few things have happened in that direction, which I want to get into right now.

Initially, my intention was to just throw that idea out into the open, and hope for someone to grab it and start building something awesome. As it turned out, this was a little too much hope. And since I’m not exactly the most patient creature under the sun, I soon afterwards started developing something in that direction.

My first try was with an already existing Wordpress plugin (I forgot the name), which had very similar features to what I wanted to have, but was missing some key functions, like native reposting. After a few hours and days of playing around with that, and going through the code and everything, I decided it would be much easier to start from scratch than to extend something that was already out there. 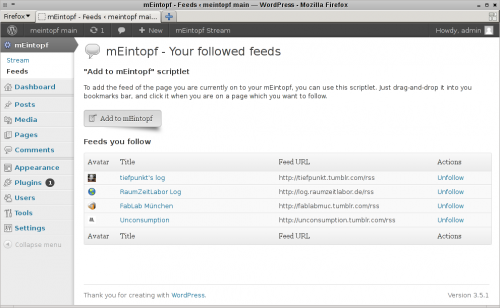 So I started developing a new WordPress plugin, called mEintopf. It is essentially a feed reader, that sits in the Admin panel. You can add a whole bunch of feeds, from blogs, tumblr, twitter, soup.io or whatever other site that offers a RSS or Atom feed. You can then go through those feeds, and repost the stuff you like with a single click. It will then appear in your blog, annotated with a short note on where you reposted it from.

Additionally, a few other features are already included in the plugin: There is a widget listing all the other blogs/whatever you follow, and a hack which displays pingbacks not as comments but as small icons next to your post (sort of taken from soup.io from a styling perspective as well). Using a second plugin called add-linked-images-to-gallery, which I forked and started to improve, you can also copy images from posts to your server, so you don’t steal other people’s bandwidth and don’t have to worry about them deleting the original post.

Thanks to @silsha for helping me with the development, and to @FlowFXx and @alohastone for using and testing the stuff.  If there are any features you want to see, or if there are any issues, let me know. Either right here, on twitter, via eMail, or create a GitHub Issue. If you want to contribute as well, that would be amazing.

You can get mEintopf as a WordPress Admin UI installation ready zip file here, and the image plugin here. For more details, take a look at the GitHub repositories. Enjoy!